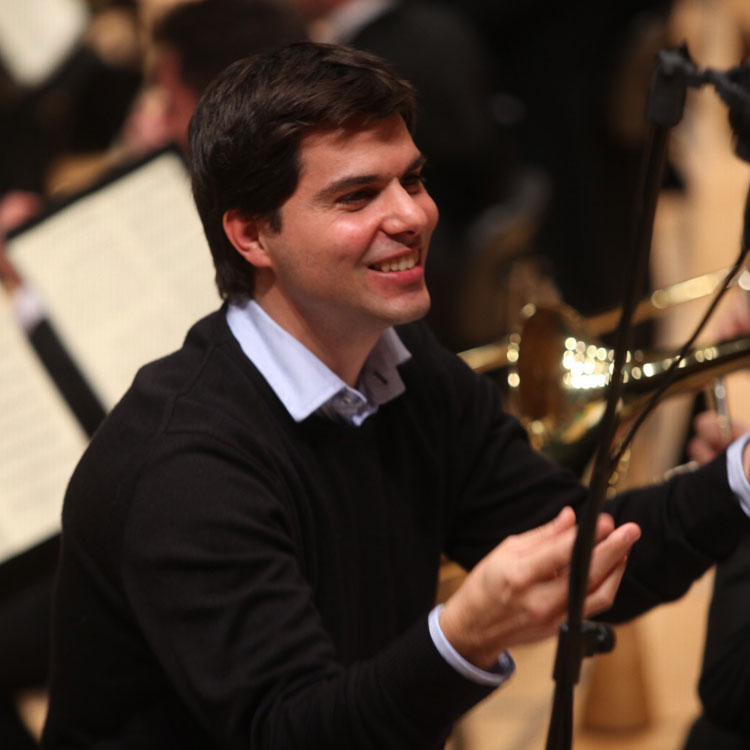 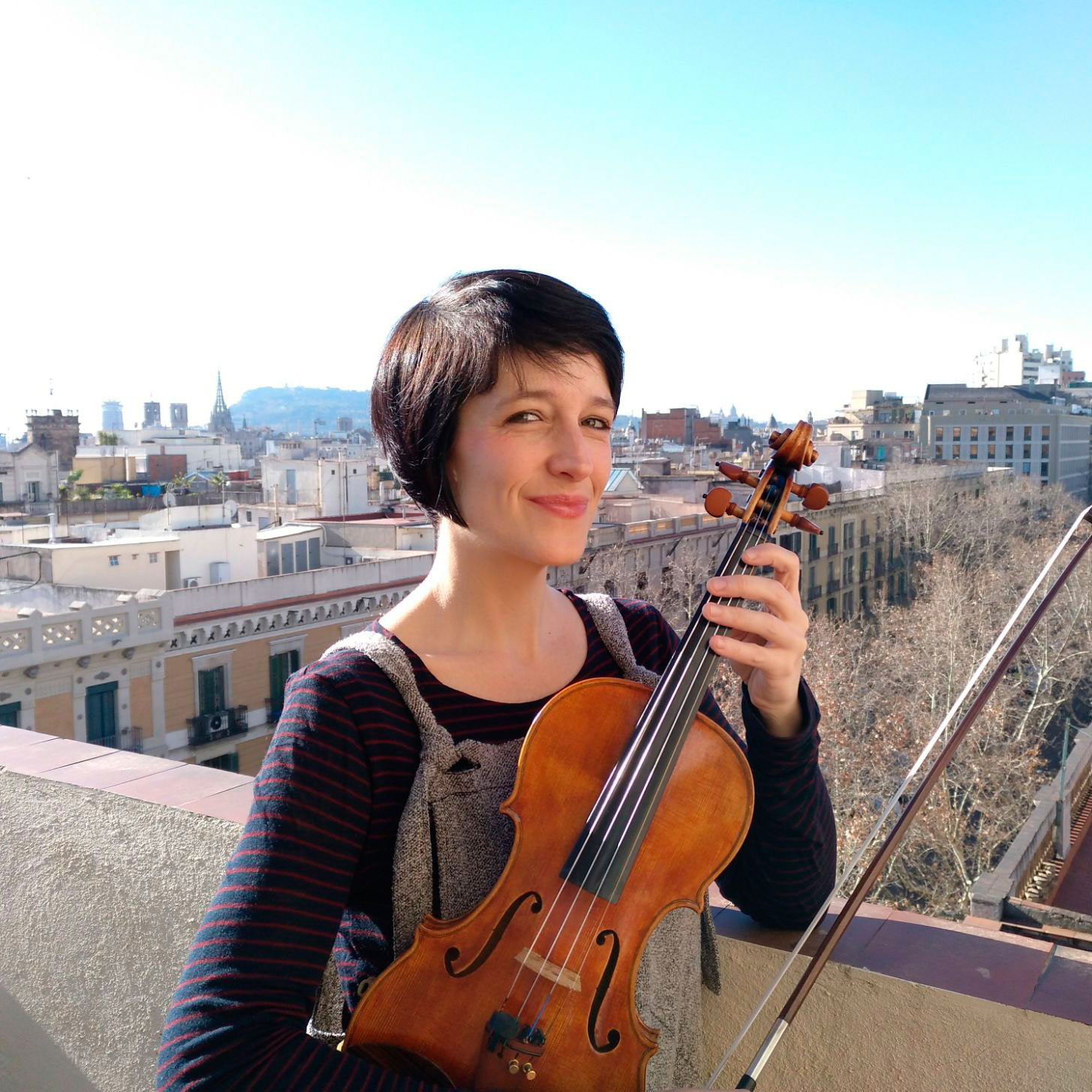 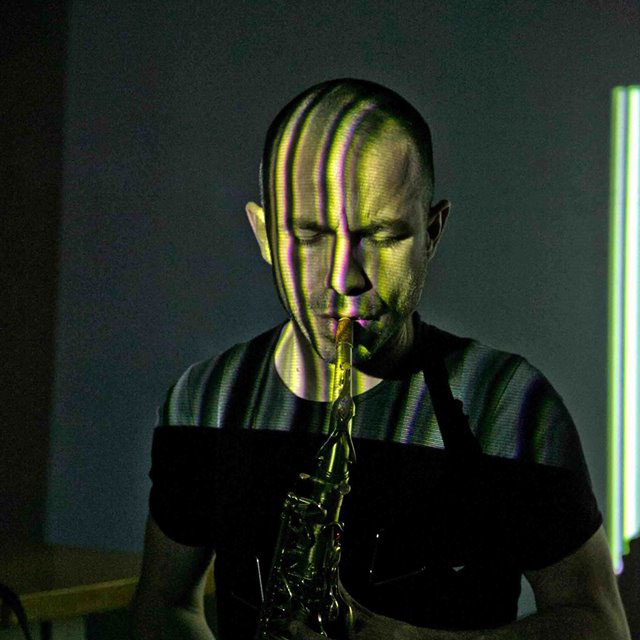 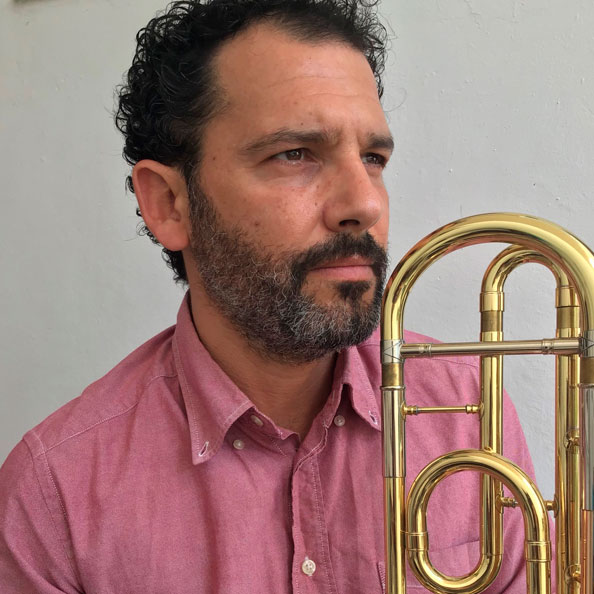 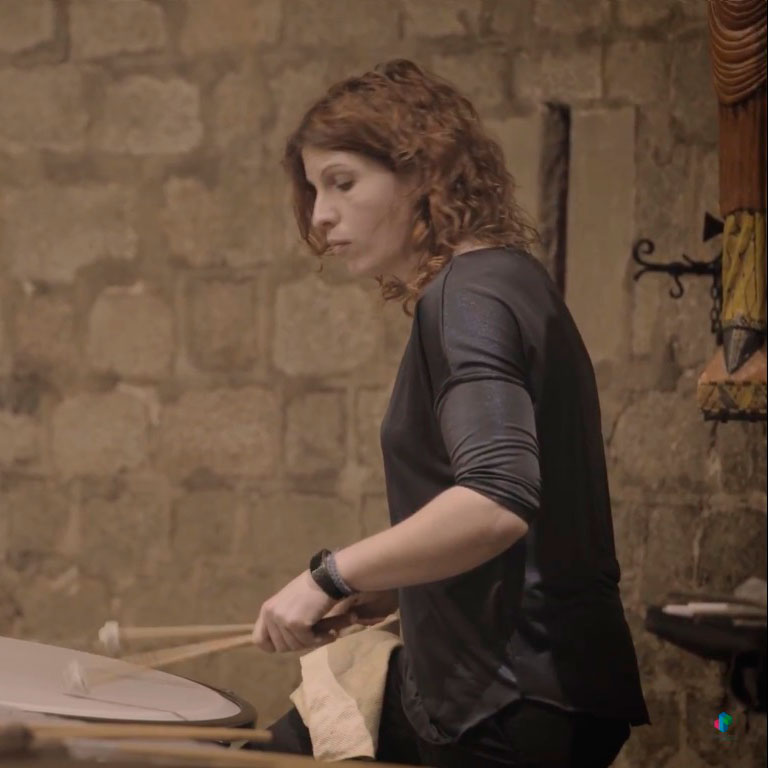 Buenos Aires, 1977. Director, Composer, and Social Educator. Current Director of the Integrasons Association and Baktun Ensemble. Pablo Persico completed his undergraduate studies in composition and orchestral study at the Universidad Católica Argentina (UCA) and then studied a Masters in Arts and Cultural Management at the Universitat Internacional de Cataluyna (UiC). He has composed for symphonic orchestra, choir, chamber music and electroacoustic. He is the creator of the Integrasons method and is an international reference for models of collective musical creation and the use of new instruments. He has carried out academic research on methods of conducting to encourage creativity and free improvisation. Pablo Persico has worked in social and educational projects for Fundación LaCaixa, Barcelona City Council, Orquestra Sinfónica de Barcelona y Nacional de Cataluña, Orquestra Sinfónica del Vallés, Consorcio Badalona Sur, Pepsi, Repsol and more. He has directed hundreds of concerts and artistic shows with professional orchestras, children/youth orchestras and choirs, musical ensembles, dance companies and visual artists etc., (in Argentina, France, Spain and Italy).

Sarah Bels, 1978, Waldbröl, Germany. After studying at the Cologne Music School, Sarah moved to Weimar where she studied at Hochschule für Musik Franz Liszt (a boarding school for musicians) and later Hochschule für Musik Hanns Eisler in Berlin. She was a trainee at the DSO Berlin and an academist at the Staatsoper unter den Linden. Sarah has played with the Bayerische Staatsoper in Munich. She is currently the first tutti violin of the OBC (Barcelona Symphony Orchestra) and participates in various chamber ensembles, such as the Reblat group, the Quinteto Gradiva, the Trio Rec4 and the Massala Quartet alongside Tahadi. Sarah volunteers in social projects such as Integrasons, Música Para La Esperanza and others. She has been playing in the sound painting group, Baktun Ensemble, since March 2017.

Jon Cottle is an English cellist, improviser, arranger and educator. Trained in traditional cello at the Royal Academy of Music in London, he has spent much of his life learning to play different styles of music, such as jazz, soul, funk, hip hop, pop and Latin among others. He has toured extensively in Europe, the United States, Canada and Japan with the American group, Clare and the Reasons and the singer-songwriter, Van Dyke Parks. He was the founding member of the Benin City Group and plays with The Heritage Orchestra in London, Eclectic Color Orchestra, Cordes del Món and the Baktun Ensemble in Barcelona. He has played in concerts and recordings with artists such as Rafael Amargo, The Bays, Jon Cale, Sir Colin Davis, Sir Peter Maxwell Davies, Goldie, Manuel Fernandez, Bill Frisell, Airto Moreira, The Pinker Tones, Dizzee Rascal and Spiritualized. He is a cello teacher of the Suzuki method and is regularly invited to give classes on traditional and modern music in Spain and England.

Classically trained, Dani Molina completed his studies at the Conservatorio Superio de Zaragoza with an award of excellence in the specialty of saxophone and chamber music. Subsequently, he studied contemporary and electro-acoustic music at the Bordeaux Conservatory (France) and then modern music at the Taller de Músics in Barcelona. He is the current solo saxophonist of the Municipal Band of Barcelona and has collaborated with orchestras such as, OMS (Madrid Symphony Orchestra), the Enigma Group, the European Community Band and various Big Bands. He has participated in leading festivals and theatres with his jazz group, the Dani Molina Quartet, and has recorded the live album «Toc Toc» as well as «Africa», which was presented at the Mas i Mas festival in Barcelona. He is carrying out research in the area of ​​improvised electronic and experimental music, performing concerts with Ramiro Martinez (Kulyela), the MONOCROM group. He currently plays saxophone in the Baktun Ensemble and collaborates in performances and festivals of performance and dance.

Badalona, ​​1978. Trombonist and versatile flugelhornist, Jordi Gómez, studied at the Badalona Conservatory and later graduated from l'ESMUC as an instrumentalist of classical and contemporary music, where he studied under Dani Perpiñan, Raúl García and Ricardo Casero. He has studied jazz trombone with Carlos Martín at the Taller de Músics de Barcelona. Jordi has collaborated with various groups such as, classical orchestras, chamber groups, coblas and traditional music groups, big bands, salsa groups, funk, etc. These include, the Orchestra of the Gran Teatre del Liceu, Cobla Sant Jordi, Toni Foundation Manero i l'Original Jazz Orquestra del Taller de Músics, Tritò Brass Ensemble, Baktun Ensemble and others. Jordi has been teaching trombone, orchestra and chamber groups at the "IEA Oriol Martorell" in Barcelona since 2007. In 2013, Jordi joined Integrasons, a non-profit association dedicated to social reintegration through music, as a teacher..

Bilbao. After receiving a grant from the Diputación de Bilbao to study higher education, Aitziber Olabarri completed her musical training at the Juan Crisóstomo de Arriaga Conservatory in Bilbao and the Barcelona School of Music (ESMUC). She has a Master’s in Music Education and a Master’s in Music Therapy. Aitziber has developed her artistic career between Bilbao and Barcelona, participating in various orchestral and chamber music ensembles. These include the Orquesta Sinfónica del Vallés (OSV), Orquesta Filarmónica de Cataluña, Coral de Bilbao, Filarmónica de Bilbao, and the Percussion Ensemble. She has worked as a music teacher in numerous and methodologically diverse institutions, having been able to combine her knowledge of interpretation and music therapy in her work. She currently works as a specialist music teacher for the Generalitat de Catalunya, forming part of a team that is driven towards the management and creation of educational projects focused on emotions in the classroom. She investigates the applications of music therapy in teaching and continues her work as an interpreter in small improvisation groups and sound exploration. 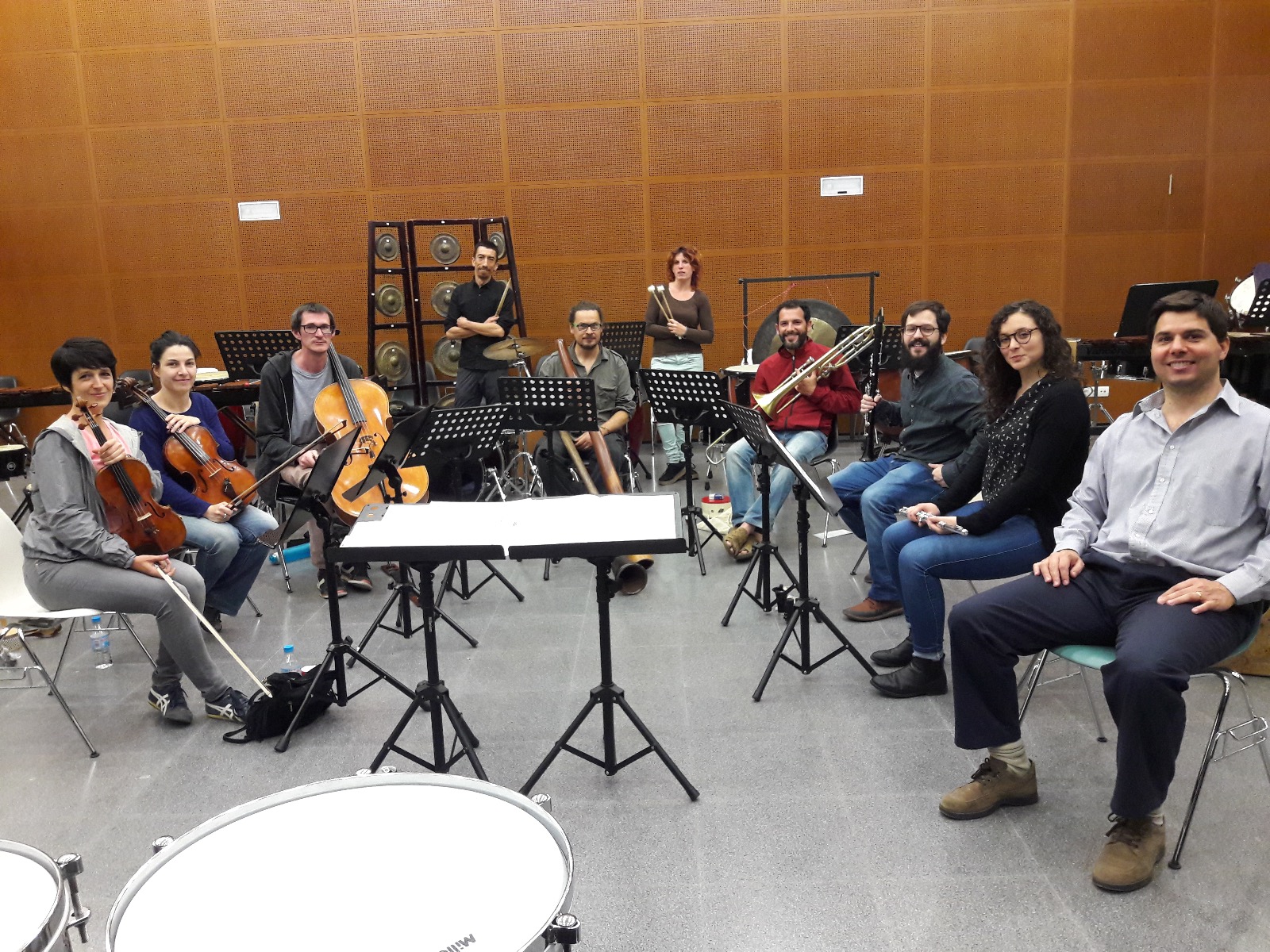 We use cookies on our website to provide you with the most relevant experience by remembering your preferences and repeat visits. By clicking "Accept", you agree to the use of ALL cookies.
Cookie SettingsACCEPT
Configurar consentimiento

This website uses cookies to improve your experience while browsing the website. Of these, the cookies that are classified as necessary are stored in your browser, as they are essential for the functioning of the basic functionalities of the website. We also use third-party cookies that help us analyze and understand how you use this website. These cookies will be stored in your browser only with your consent. You also have the option to opt out of receiving these cookies. But opting out of some of these cookies may affect your browsing experience. Read More
Necesarias Always Enabled
Las cookies necesarias son absolutamente esenciales para que el sitio web funcione correctamente. Esta categoría solo incluye cookies que garantizan funcionalidades básicas y características de seguridad del sitio web. Estas cookies no almacenan ninguna información personal.
No necesarias
Las cookies que pueden no ser particularmente necesarias para el funcionamiento del sitio web y se utilizan específicamente para recopilar datos personales del usuario a través del análisis, anuncios y otro contenido incrustado se denominan cookies no necesarias. Es obligatorio obtener el consentimiento del usuario antes de ejecutar estas cookies en su sitio web.
SAVE & ACCEPT